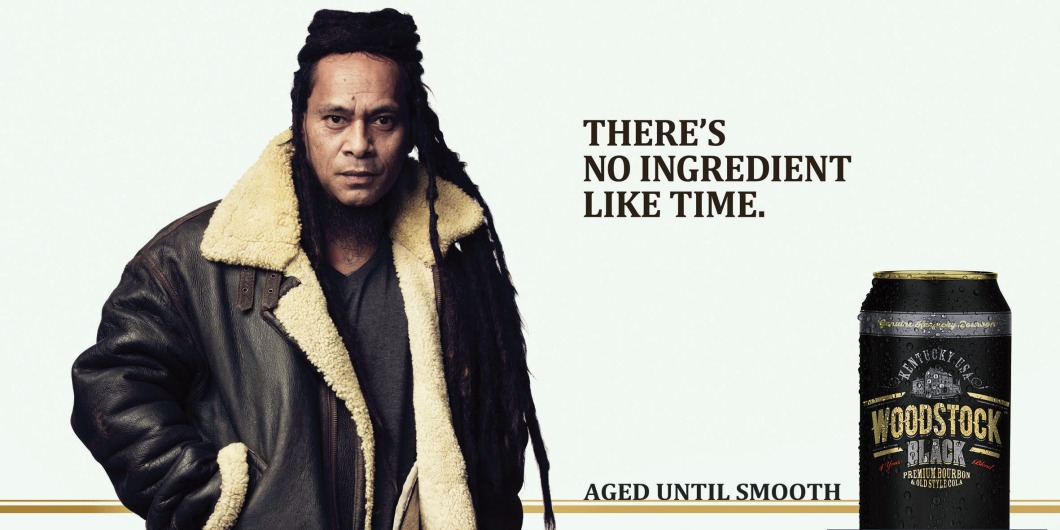 The cast of the latest advertising campaign for Independent Liquor New Zealand did not include the faces one generally associates with the slick veneer of alcohol marketing. To promote the new Woodstock Black premium RTD, with its four-year aged bourbon, the stark posters suggest there is “no ingredient like time”. And to prove it, advertising agency Whybin\TBWA recruited local males who, according to creative director Christy Peacock, are “real blokes” from the heartland of south and west Auckland.

“Their skin is etched with wrinkles, clothes are worn, and their eyes tell the story of a life well earned,” he said.

In order to capture the authentic masculinity of these street-cast locals — among them a motorcycle racer, a silversmith, and a musician — the agency recruited renowned commercial and fine-art photographer, Simon Harsent. Splitting his time between Australia and the US, Harsent has cultivated a reputation for (among many specialities) capturing arresting male portraiture that is bracingly minimal, while evoking a deep sense of character. A clear fit for the campaign’s aims, the photographer was excited from the first time he saw the brief.

“How it was presented to me was showcasing portraits of wonderful characters, some on location, some in the studio,” Harsent said. “My first gut reaction was to suggest we shoot them all in the studio against a white background to simplify the images, I felt all it really needed was fantastic portrait studies.

“As much as I like shooting portraits on location, I felt these just needed to be simple, no distractions, just a focus on the people.”

It is an approach the photographer has had plenty of opportunity to refine: his most recent personal project is an incisive study of masculine identity, entitled GBH: Great Britain’s Hooligans. A series of intimate and intense portraits, both monochrome and colour, examines the human face of the fascinating football subculture, infused with pride, bravado and respect. The project, recently exhibited in Sydney, follows the photographer’s previous survey of British football’s various physical environments in a series called The Beautiful Game. It’s not difficult to see how these authenticity-driven solo shows have fed into the bold aesthetic of Harsent’s Woodstock Black campaign — some of his earlier work was even included in the mood board the agency put together for the campaign brief. 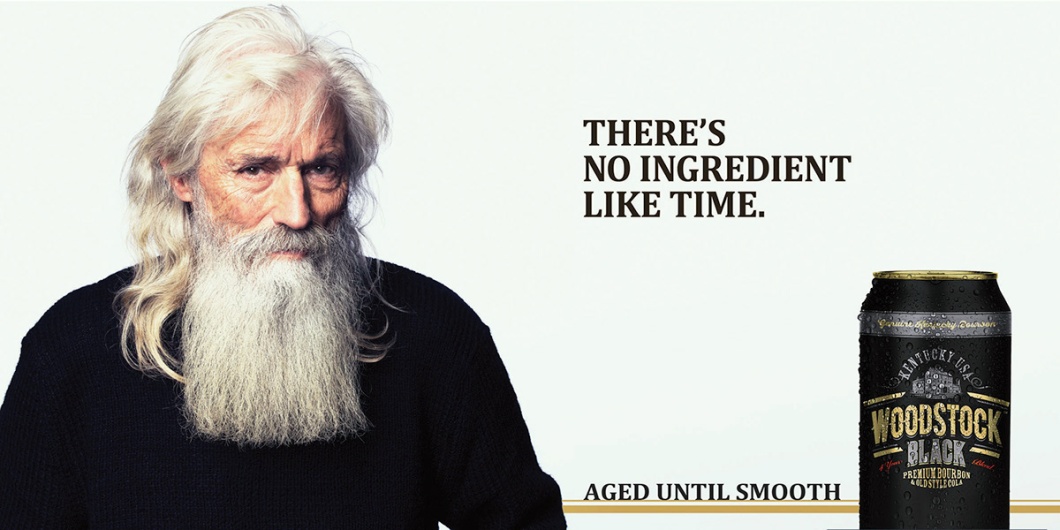 While there is clear artistic similarity between these works, the context in which the images were produced was very different. Where fine-art work can develop carefully over long periods of time, commercial work often requires speed and efficiency in producing quality images to a deadline. In the case of the Woodstock Black shoot, Harsent created all the portraits in a single day, flying over from Sydney to shoot in central Auckland’s Thievery Studio. Key to succeeding within these limitations is the development of good, trusting relationships with clients, the photographer explained.

“With a job like this, everybody is so excited about it that the collaborative process just happens naturally. Also, the time span for getting it done was so quick it was more about everybody reacting intuitively, as we didn’t have too much time to procrastinate. I like it when that happens, I find sometimes you can have too much time on a job, and things get confused because you have time to question and overthink everything.”

Most of the subjects for the series had no experience in front of the camera, which suited the photographer’s objectives nicely. Working to a quick tempo for the shoots, Harsent was focused on creating a spontaneity to the production. While he will sometimes spend a good deal of time talking with a portrait subject before shooting, for these images he wanted to maintain an air of distance and mystery. In this case, knowledge of his subjects would have only got in the way. Similarly, he kept his directions very minimal.

“I never suggest poses: I might just suggest a change of weight distribution or that someone move off their mark then back onto it, just to break it up if the subject becomes too static. I’m not the sort of photographer who has sitters jump up and down, my portraits are quite considered, and I like the awkwardness that can come from very little interaction.”

The slightly detached atmosphere is further enhanced through a lighting set-up favouring crisp simplicity, presenting the charismatic features and adornments of the cast in an even, straightforward manner. Harsent set up a Broncolor parabolic reflector in front, with two lights at either side bounced into v-flats to create the unadorned white background. The result is a series that looks equally striking presented in colour or black-and-white.

“For me, sometimes simple is the best approach,” the photographer explained. “It allows me to concentrate on the subject rather than all the technical aspects. We mapped out two positions for the main light, one just to the left of camera and the other more of a side light, and we would move the light between the two positions depending on how I felt once the subject was in front of camera.”

Harsent’s Woodstock Black campaign is a fine example of the symbiosis between personal and commercial work that so many photographers strive for. It’s not always an easy balance, but in seeking out work that is in line with his own personal vision, the photographer is able to dance between shooting styles in a mutually beneficial fashion. In addition to the advertising work paying for artistic projects, the challenge of working collaboratively helps the photographer bring fresh perspectives to his personal shoots.

“I think where it falls down is when photographers take on work that really isn’t true to their style, just for the sake of the money. That’s never going to work, and it’s always going to be a battle — sometimes photographers should just say no to a commission if they don’t think they are right for it.”