A universal connection through art

The Painted Peacock Project is the creation of four Kiwi women who dreamed of travelling the world — combining their wanderlust with their creative skills, they set out to help communities around the world through art expression. Adrian Hatwell spoke with one part of the travelling team, photographer Sacha Stejko 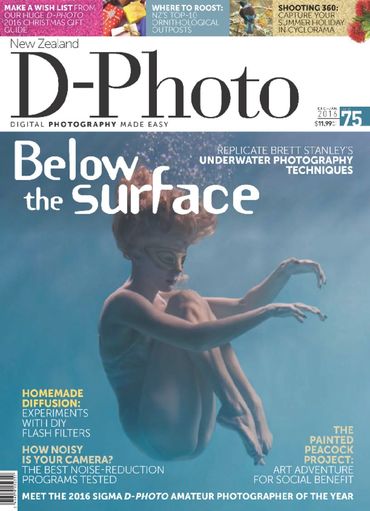 Artists have long looked to travel for creative inspiration, to broaden experience, shift perspective, and challenge ideas. When four creative Kiwi women discovered they were all beginning to feel that yearning to roam, they decided to team up and tackle a travel project with a difference. Rather than pursue their solitary crafts in isolation, they would travel to India and collaboratively put their skills to use, in aid of both creative expression and social benefit.

From this idea, the Painted Peacock Project was born. Four artists from different disciplines came together to plan an excursion to the bustling city of Udaipur, in the state of Rajasthan, where they would hold workshops for impoverished primary school students, as well as create a vibrant mural as a gift to the city. The collective includes illustrator Ema Frost, jewellery designer Cathy Pope, stencil artist Hayley King (also known as Flox), and photographer Sacha Stejko.

For Stejko, the youngest of the group, the experience was a first — she had seen her share of the globe, but never on an adventure with such purpose. The self-funded project took over eight months of planning, with the primary goals of finding a school willing to participate in the workshops, as well as a suitable wall for the mural. Before she had even left New Zealand, the photographer had to come to grips with the unique challenges presented by cultural difference.

“India is not the easiest place to get things done,” she said with a wry smile. “The first school we asked said yes to the workshops, but then said no, because they thought we were going to sell off the kids’ artwork. They couldn’t quite understand the concept of why foreigners would come over and spend their own money, put a workshop together for local children, and not get anything out of it money-wise.”

That would not be the last such roadblock the project would hit in its long lead-up, but luckily the group had a man on the ground in India. Rajesh Soni is a photographer and painter, well-known in the Udaipur region, who was able to help shepherd the Kiwi artists through the often-painful process of making international arrangements. Stejko says his efforts, both in planning and during the project, earned him the status of fifth member of the Painted Peacock Project.

But there are some things even the best stringer can’t help with, and the photographer found herself running into plenty of those once the time came to depart for India. From the free-for-all seating experience on the Indian airline, to having half her photography kit fail to make the flight, to dealing with security false-alarms at Delhi airport, just the simple act of arriving in India proved to be a challenge that came close to sinking the project off the bat.

“The girls had kind of warned me before I got there that everything would kind of fall to shit, just because it’s India — nothing goes to plan. But I didn’t realize that’s actually the way things go. There were so many obstacles, daily.

“But I found it really exciting, because you never knew what else could go wrong. I haven’t really been on an adventure like this, so I’m loving it all — the drama and the stress … but I wouldn’t tell the other girls that.”

By the time the airport trials were sorted, it was time for the collective to dive into the children’s workshops they had arranged. They had selected Badi Primary School, a small government primary school in a rural area, 20 minutes’ drive from the city of Udaipur. The children attending class there are some of the poorest and most under-resourced in the area, Stejko explained.

“They don’t have any textbooks, they don’t have anything. It’s basically two buildings, tiny rooms with no lights, no anything. But they are the happiest children I have ever seen. They were so kind and so welcoming to us, they were amazing.”

The workshops ran over three days: Pope led the children (and some of the teachers) in jewellery designing using gemstones donated from a manufacturer, King taught kids how to make stencil art using scalpels and spray cans, which they had never used before, and Frost explained painting and linework using traditional gouache paint in bright colours. Stejko was responsible for documenting the whole affair, through stills and video.

Having their photo taken is not an opportunity these children have often, so the photographer intends to send all the images back to them, so they can have another memento of the experience, as well as the art produced in the workshops. The whole workshop experience touched Stejko as much as it did the kids.

“Because I was on the outside, watching the whole thing, I could see all the impacts the workshops had, the influence of being in that creative space. There were so many kids that I would catch, they would be in their own little world, and then they would see me and their smiles would just kill me.”

As a final farewell, the group returned to paint a wall of the school building with a big, bright mural — a parting gift to a community the four artists had quickly grown very attached to.

“It was quite emotional at the end of the three days,” the photographer recalls. “We didn’t speak the same language, but that connection through art is just universal. Sharing something like that is such a bond. Everyone got a bit teary at the end.”

Following the workshops it was time for the Painted Peacock Project to get to work on its next feat, painting a large-scale public mural on the thronging streets of Udaipur City. This was a two-day labour in oppressive heat and alarmingly close to a very chaotic street. King and Frost handled the painting, while Pope distributed information to interested locals, with Stejko again documenting the entire process.

The wall being painted ran parallel to a road with no pathway: instead it had an open drain underneath it, which needed to be covered so the painters could work. The space was extremely tight, and if they stepped back from the wall too far they would be right in the path of a very busy road, Stejko recalled.

“We had cows and donkeys and dogs and motorbikes and scooters and tuk-tuks and people — just the amount of things that go through that area, it’s insane. All your senses are so heightened, because they have to be. It’s so loud, everybody is tooting — not to be rude, but to let you know they are there.”

This situation made shooting the proceedings tricky too, but after finding a good vantage point for GoPro footage, the photographer spent her time exploring creative angles and dodging traffic to get the job done. On the bright side, the sheer amount of traffic meant the collective got a lot of attention with their work.

“We had a lot of people stop, they were really curious. Four white women in the middle of the city, painting this wall — we drew a lot of attention.”

Some of that attention included being featured in the Times of India newspaper and interviewed on a Rajasthan television news station, where the group explained that the mural was their gift to the city. As this message spread, the artists of the Painted Peacock Project become local celebrities.

“Every time we went anywhere people would recognize us and just start clapping and saying things like, ‘Thank you for our beautiful gift, for making our city cleaner, I hope people will treat it with respect’,” Stejko recalled fondly. “It was amazing how receptive people were.”

In the final days of the trip, having achieved what they set out to, the group was finally free to explore Udaipur at their leisure. The photographer used that time to create an extensive body of portrait work, documenting the city’s unique characters, which she found to be an entirely different experience to shooting portraits back home.

“They were so cool: you’d ask if you could take their photo and they say ‘yes’, then they just stand there. They don’t do anything, they don’t try to force anything. Which is really exciting as a photographer, because it’s so raw and honest. I feel like you get so much out of that.”

A selection of these portraits, along with much of the documentary work she shot over the trip, will comprise the photographer’s contribution to a Painted Peacock Project group exhibition at Auckland’s Allpress Studio, on December 6–10. Also on display will be new India-inspired works from King and Frost, and jewellery created by Pope while in India. Twenty per cent of all sales at the exhibition will go to children’s charities — 10 per cent to Badi Primary School in India and 10 per cent to KidsCan here in New Zealand.

Having been home from the trip for a month, Stejko said the trip was so relentlessly exciting that it has been nice to come back to the relative quiet of Aotearoa.

“I was on a buzz the whole time, which can get quite tiring. It was such a full-on trip, it wasn’t a holiday — we did so much, we achieved so much, we bonded so much.”

And though they may still be shaking off the fatigue from their adventure, the Painted Peacock Project crew is already thinking about another collaborative excursion next year. The photographer is quite certain this is just the beginning of something very special.